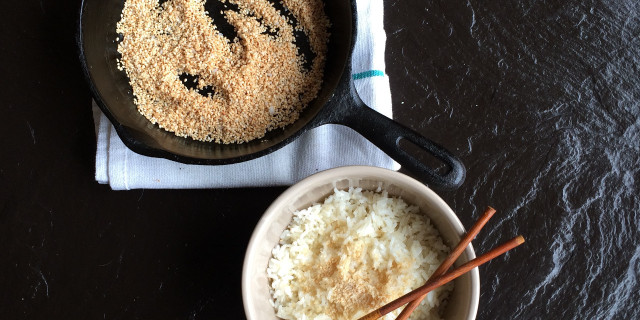 Not secret in the sense of nobody knows about it—at least 125 million Japanese people are in on it—but secret in the sense of unexpected, always on hand and incredibly taste-altering. Gomashio is good on all the things you would expect it to be good on—like rice, grilled salmon or udon soup. It’s also good on quite a few things you may not expect, like ice cream, steamed asparagus and Caesar salad.

A version of gomashio is sold in stores, but by making it at home you get to control the kind of salt you use, the amount of toastiness and the ratio of sesame to salt. That ratio can be pretty much anything you want, but 16:1 works for me. It’s easy to remember—there are 16 tablespoons in a cup, so it’s one cup of sesame for every tablespoon of salt. There is definitely a difference between gomashio ground in a mortar and gomashio buzzed in a spice grinder (hint: the harder way is better). But if you don’t have a mortar and pestle, buzz away.

I love Maldon salt for this. It’s very coarse, so even when you’re done toasting and pounding, there is still a little crunch of salt left.

Makes about 1 cup (can be halved)

1 cup sesame seeds, unhulled is my preference, but use hulled if you can’t find them
1 tablespoon coarse sea salt

Scoop the mix into a mortar and bang away until the sesame seeds are very coarsely ground. If using a spice grinder, put about half of the seed mix into the grinder and pulse in teeny-tiny bursts until you get the texture you want.

Store gomashio in a jar with a tight fitting lid. Try to use it all within a month. And then make more.