Navigation Menu
Home » Kitchen Basics » Why Don’t I do this more often?

Why Don’t I do this more often? 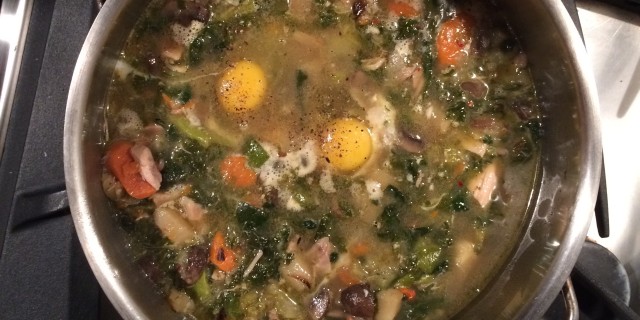 A very long time ago I learned a little trick that I don’t use nearly enough: Crack an egg and drop it into barely simmering soup. If you’re in a nurturing mood, spoon hot soup over it so it cooks evenly. If not, don’t. Either way the egg won’t mind. If you’re a vegetarian, a soup-poached egg adds a little protein to a vegetable soup. Even if you’re not a vegetarian the egg will still add protein. It doesn’t discriminate. Most importantly egg-poached-in-soup is fun and tastes good, which is kind of the point of cooking anything. How firm/not firm you liked your poached egg is kind of like tastes in neckties and scarves–extremely  personal. I leave mine in just long enough to set most of the white and some of the yolk–about 2 minutes. This will give you a super runny egg that allows you to do things like spear a slice of carrot and see if you can turn it in the liquidy yolk to coat it completely with molten yolk. This is exactly the kind of thing you weren’t allowed to do as a kid. As if turning carrots in yolks would lead to a life of crime.
When yo

u’re ready to dish up the soup, work around the egg and ladle the soup into a bowl and set the egg on top. The heat from the soup takes the egg as far as I’d like it to go. If you’re a firmer person, egg-yolk-wise, not morally, let the egg sit in the soup for a minute or so longer. The soup you see here is a version of my old standby chicken soup, but here are some suggestions for other soups in which to poach eggs: homemade tomato, lentil (in which case forego the basting, it’s not a good look), potato-leek and plain old chicken broth. Oh, and crack a fair amount of black pepper and sprinkle some very coarse sea salt over the yolk.