Pan Broiled Shrimp in the Shell 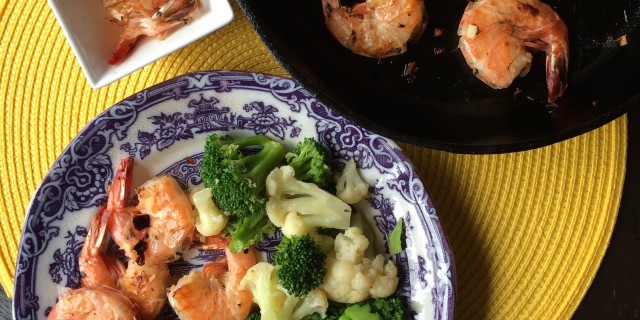 Leaving shrimp in the shell is not a lazy person’s out. You still have to clean (i.e. devein) them before you cook them. I’m sure some people would be happy not cleaning them and just pulling or wiping out the vein as you eat them, as is done in most peel-your-own places. But that skievs me out a little. And I don’t get skieved out easily.

One of the many great things about the beach at Puerto Vallarta is the vendors who walk up and down selling food—cups of fruit sprinkled with chili, salt and lime, whole little fish on a skewer and shrimp on a stick. For a dollar (or so) you can get half a dozen skewered shrimp which can be doused with hot sauce and/or lime if you like. I like. The first time I went, I was peeling the shells off each shrimp until I saw I was the only one on the beach doing that. Then I just starting tearing into them, shells and all, and all of a sudden shrimp-on-a-stick wasn’t just a snack, it was the best thing ever invented. If the shells on your shrimp are thin enough, like those in the picture, just chomp away. Maybe the wild American shrimp folks can confirm this, but the shells on the ‘white’ variety of wild-caught US shrimp always seem thin and crisp enough to eat. I don’t eat any other kind of shrimp but wild-caught anymore , so I haven’t done any comparison eating to confirm.

Clean the shrimp: With a kitchen shears cut through the shell along the curved outer side of each shrimp. Cut only deep enough to remove the dark vein. Rinse the cleaned shrimp briefly under cold running water, leaving the shell intact.

Heat the vegetable oil, ginger, garlic and red pepper in a small skillet over medium heat until the spices start to sizzle. Cook, shaking the skillet, one minute. Remove the skillet from the heat and cool. Stir in the lemon juice and salt.

Pour the marinade over the shrimp in a medium bowl. Marinate at room temperature, losing frequently, one to two hours (Alternately, marinate the shrimp in the refrigerator up to 6 hours.)

Choose a heavy skillet large enough to hold the shrimp in a single layer (a 12 inch cast seasoned cast iron skillet is ideal.) Oil the skillet lightly and place over medium heat. 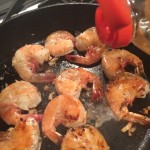 If you have some on hand a little splash of mirin right at the end of cooking couldn’t hurt.

Jusst as the skillet begins to smoke, add the shrimp carefully. Cook, turning once, just until cooked through at the thickest part and the shells are deep golden brown, with a few charred spots. Serve the shrimp hot or at room temperature.

Shrimp cooked in the shell, whether broiled, pan-fried or grilled are delicious, and leaving the shells intact yields moist and firm shrimp. Prepare one pound of large shrimp as described in step one of Pan-Fried Shrimp in the Shell (recipe, p. 00) and toss with any of the following marinades. Cook as described in step 4 of the recipe.

– Thinly slice 2 scallions. Toss in a bowl with 4 bay leaves, crumbled fine and 2 tablespoons each lemon juice and olive oil. Season generously with salt and pepper and add the shrimp. Marinate at room temperature, tossing frequently, one to two hours.