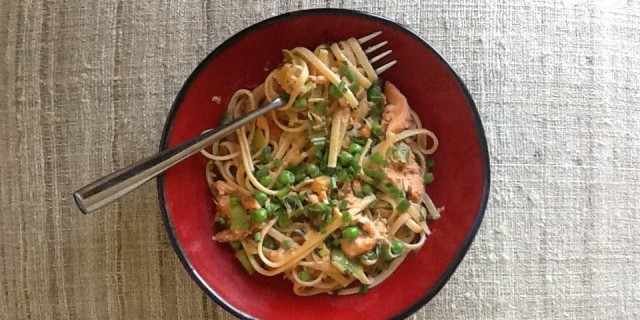 Fewer years ago than that, I wrote a book on stovetop smoking and developed a version of that pasta recipe using ‘hot-smoked’ salmon* I made myself in place of the usual cold-smoked salmon. I liked its more assertive flavor and the fact that a little of it went a very long way. If you don’t have a home smoker, hot-smoked salmon is widely available in supermarkets. Food producers, never knowing when to call it quits, have developed a variety of seasonings like “Asian” and pastrami for their hot-smoked salmon. Call me cranky, but pastrami rub belongs on pastrami and, ideally, should be limited to the Lower East Side of Manhattan. And call me cranky again, but I refuse to refer to the Lower East Side as the LES or the Upper West Side as UWS. I’m still trying to get over “Tribeca.”

This incarnation of my recipe calls for a mix of half-and-half and cream cheese which lightens and tarts things up. Depending on the smokiness of your salmon you can use even less than the 4 ounces listed below. Save the rest for your next batch of scrambled eggs or crumble it over deviled eggs.

Bring a large pot of salted water to a boil. Meanwhile remove any skin and shred the salmon coarsely, keeping an eye out for bones as you go. Set the shredded salmon aside.

While you’re waiting for the water to boil, heat the olive oil/butter in a medium skillet over medium heat. Stir in the leeks, cover the skillet and cook, stirring often, until the leeks are tender, about 8 minutes. While the leeks and are cooking, stir the half-and-half, cream cheese, tomato paste and tarragon together in a small bowl.

Stir the peas into the leeks and cook for a minute. Stir in the tomato paste mix and bring to a boil. Set the sauce aside.

Ladle off and reserve about ½ cup of the pasta cooking water, then drain the pasta in a colander. Slide the fettuccine back into the pot and place the pot over medium-low heat. Scrape in the sauce with a rubber spatula and add the parsley/chives and salmon. Bring to a gentle boil, season with pepper and, if necessary, salt. Cook until the salmon is heated through and there is just enough lightly thickened sauce to generously coat the pasta. If the pasta looks too dry, stir in some of the reserved pasta cooking water about 1 tablespoon at a time. Serve in warm bowls.

* Hot-smoked salmon is pretty much what it sounds like: The salmon is smoked over/with enough heat to fully cook it. Cold-smoked salmon—the kind you put on a bagel—is smoked over very low heat and that is what gives it that silky smooth texture. Don’t misunderstand me. I put hot-smoked salmon on a bagel too. Normally I am a “very light schmear” guy, but with hot-smoked salmon I like a more generous schmear. For the record, no matter what kind of schmear you order, virtually ever deli-counter guy will ignore you and put enough cream cheese on a single bagel to schmear half a dozen. Then you have to go through this whole guilt-ridden process of wiping off 70% of the cream cheese with a napkin and looking for a street-corner garbage can to throw it away.