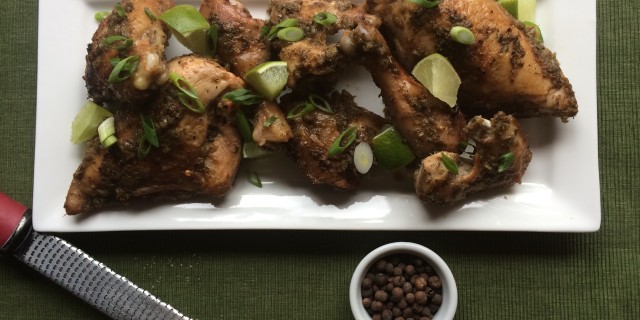 This recipe came to me not from Jamaica but from Grand Cayman. I spent 3 weeks at a dive lodge way out on the eastern end of the island. The deal was I would cook for the guests in exchange for a room and 3 dives a day (sometimes 4 if there was a night dive). You know it was a well-negotiated agreement because all parties felt as though they got the better deal.
Down the street from the lodge was a dive bar in the best sense of the word. Loud Caribbean music, open on the beach side to let the breeze blow through, the steady ‘thwap-thwap’ of dominoes slammed onto the metal table… Around midnight, Dookie came down the street with a homemade Jerk cart, featuring a rickety chimney springing up from the ‘oven.’ A few pieces of chicken and a slice of white bread in a paper French fry boat—that was the menu. I don’t know what this man did, but that was some of the best chicken I ever ate. Finally, after pestering him a few times, he gave me his “recipe.” A while passed before I tried it. (I found the recipe scrawled on a bar napkin stuck in the side pocket of my dive gear bag the next time I went diving.) I don’t think it’s exactly the same but it’s pretty close. Dookie used a little wood in with his charcoal. If you have an outdoor or stovetop smoker, smoke the chicken in place of roasting it. I would take the skin off to smoke it.
You could use this marinade for 2 ½ pounds of chicken wings as well. Or marinate shelled shrimp or thick, sturdy cuts of fish like mako shark or swordfish steaks, or salmon or mahi-mahi fillets. Marinate seafood for 6 hours at most (or 3 hours in the case of shrimp). Chilled, this makes an excellent dish to bring on a picnic.

Makes About 1 ½ Cups : Enough to marinate 2 ½ pounds of poultry or fish

Place the chicken pieces in a heavy-duty resealable plastic bag. Stir the lime juice and salt together in a small bowl until the salt is mostly dissolved, then pour the mixture into the bag. Squeeze out most of the air in the bag, seal the bag, and refrigerate 2 hours, turning the bag two or three times. This step gives the chicken a nice tart flavor, but you can skip it if you’re short on time. If you do skip, just add the lime juice and salt to the processor with the rest of the marinade ingredients.

Process all the marinade ingredients in a food processor or blender until the mixture is fairly smooth. Scrape the marinade into the bag with the chicken, seal the bag securely, and mush it around to coat the chicken with marinade. Marinate at least one day or up to two days. (Marinate chicken wings a maximum of one day; seafood steaks 6 hours, and shrimp 3 hours.)

Heat the oven to 450 F. Line an 11 x 9-inch sturdy baking sheet with aluminum foil and lightly oil the foil.

Empty the bag of chicken into a colander and drain briefly. Put the chicken skin side up (if you left the skin on), smoothing off all but a thin, even layer of the marinade as you go. Spoon a little marinade over any bare spots. Roast until the chicken and marinade are browned and the chicken is cooked through. The best way to check is to poke an instant reading thermometer into the thickest part of a few pieces of chicken. If the temp is over 160, you’re good. Second place in the chicken-checking division goes to poking the chicken in the thickest places with a metal skewer or paring knife; if the juices run clear, it’s done. If they are at all pinkish, it’s not.

Note: You can go in any direction with the chiles, depending on your preference and what is available. If you like things fairly spicy, use 4 Scotch bonnet or habanero chiles or 6 jalapenos. Tone it down or jack it up from there, as you see fit.