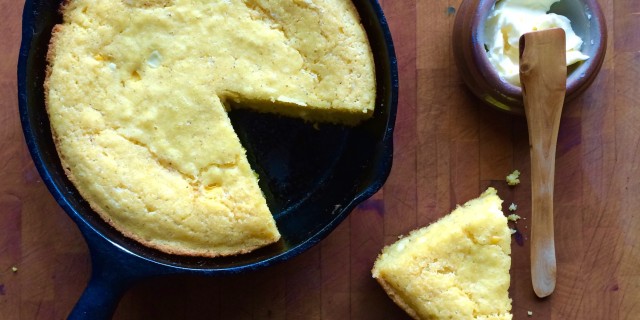 I don’t know why I think of cornbread as a summer thing, but I do. Maybe because it’s picnic-y or because it goes so well with other summer things like cole slaw, barbecued chicken and all kinds of salads. I’m doubling down on the summer thing by adding fresh corn kernels to the mix. “Out of season,’ aka not summer, leave out the kernels.

This is closer to Southern cornbread (it has no white flour) than to Northern cornbread (it does have a touch of sugar). The vegetable oil is neither and would probably send any Southern cook running for the hills, but it gives the finished cornbread a moistness that lasts for a day or two and even in the freezer for a couple of weeks.

If you like, double the dry ingredients and set half of them aside for a second batch. And don’t let the rest of the buttermilk go to waste. Use it instead of regular milk in pancakes or try it in smoothies. Or make this.

Makes one 8-inch round cornbread (6 to 8 servings)

Whisk the buttermilk, sour cream, egg and vegetable oil together until well blended. Stir in the dry ingredients just until blended, don’t overmix.

Melt the butter in a small (8-inch) cast-iron or other oven-proof skillet over medium heat until the butter is light brown. (It may be hard to tell when the butter turns brown in a cast-iron skillet, so wait for the foaming to die down and for the butter to smell nutty.)

Scrape the batter into the hot skillet. Bake the cornbread until golden brown around the edges and springy in the center, about 25 minutes.

Remove and cool at least 10 minutes before serving.