Navigation Menu
Home » Everybody Loves… » A Bowl of Green

A Bowl of Green 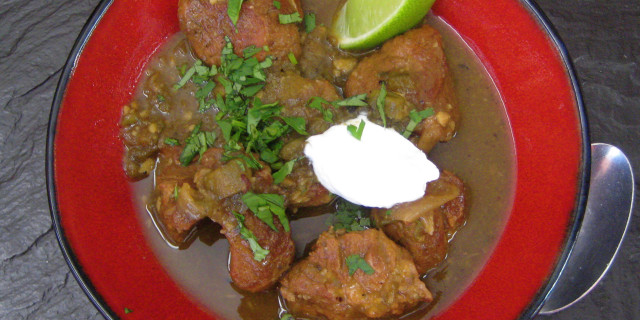 Posted by Chris on Apr 3, 2015 in Everybody Loves…, Weekend Warrior | 0 comments

Green chili is one of America’s iconic dishes. Maybe not as iconic as New England clam chowder, Kansas City barbecue or Chicago deep dish pizza, but an icon none the less. Pork, onions, green chiles of one type or another (hopefully Hatch*) and garlic are pretty standard in green chili recipes, but after that, all hell breaks loose. This is my version, with some of the chiles added at the start and some set aside for the last few minutes. Adding the chiles at the end gives a little burst of green (flavor and color) to the finished chili and also lets you control the heat. With chiles, you never know what you’re going to get. Two of the same type of chile from the same bin can be radically different in heat level. My version of green chili is thickened with toasted corn tortillas which, as far as I know, is not standard practice. It is very, very good, especially when served with cilantro, sour cream and lime wedges.

Roast the peppers and cool them. Scrape off the blackened skins and seeds. Cut two of the poblanos and all the serranos into ½ inch strips. Leave the remaining 2 poblanos as they are.

Rub a heavy skillet or griddle with a paper towel dipped in vegetable oil. Heat over medium heat. Toast the tortillas in the pan until spotty-browned on both sides. Remove and cool.

(If you like to multi-task, you can roast the chiles while the tortillas are toasting. Click on the photo below.)

Cut the pork into 1 ½ to 2-inch chunks, cutting away any excess fat as you go. Season the pork with salt. Pour enough vegetable oil into a heavy 4-quart (or so) Dutch oven or pot. Heat over medium heat. Add half the pork and cook, stirring often, until the water the pork gives off is evaporated and the pork is browned very well on all sides, about 8 minutes. Adjust the heat as the pork browns, so there is a steady sizzling and the pork browns evenly without burning. Remove the pork to a bowl, add a little more oil if necessary and brown the rest of the pork.

Take the pork out of the pot and add the onions and garlic, . Stir until the onions pick up the brown bits from the pan and are wilted, about 4 minutes. Stir in the poblano and Serrano strips (not the whole roasted poblanos) Pour in the beer and bring to a boil. Boil until reduced by about half. Add the stock and cumin and bring to a boil.

Roast larger peppers directly over the flame; smaller peppers and the corn tortillas do well on a cast iron griddle

Adjust the heat so the liquid is simmering. Cook, uncovered, until the pork is tender, about 1 ½ hours. At that point, there should be just enough liquid to cover the pork. If necessary, top the liquid off with more stock or water during cooking to keep the pork submerged. Remove and cool 10 minutes. (The chili can be made to this point up to three days before serving. Cool and refrigerate. Heat over low heat to simmering before serving.)

If necessary, reheat the chili to simmering. Crumble the toasted tortillas into a blender jar. Add the remaining roasted poblanos. Add two ladlefuls of cooking liquid (along with whatever vegetables come with it) to the blender. Blend at low speed until very smooth. Pour back into the pot and heat to simmering. Cook 5 minutes. Check for salt and add more if necessary.

*This is one of many places that ships roasted Hatch chiles. I am recommending these folks because I have used them in the past.